Dear all,Greetings from our REVEAL network!
We would like to seize the opportunity to give you an overview of the latest developments in 2013:On December 19th there was the formal lift-off for the „REVEAL“ cooperative, adopted by our General Assembly. REVEAL will now be the official home of LEVEL5 and the umbrella organisation of our European network from 2014 onwards.In November we reached 200 registered users in our my-VITA e-portfolio that we not only offer to individuals as platform to compile their CV, competence evidences and all kinds of work proofs. It has also been the cooperative learning space for the projects VITA and EDUCCKATE. Other projects and networks (PROVIDE and GINCO T&T) will follow in 2014. Hence my-VITA can easily be used as project management tool and collaborative networking space.Try it out! (www.my-vita.eu)

We also used it as application tool for the first VITA award that was handed over to the 10 winners (from 60 applicants) in our conference in October 2013 in Dublin. The conference was a great success – there were approximately 80 participants from 15 countries – among them the Irish Minister of Training and Skills, Ciaran Cannon, who, after a stirring keynote, handed over the LEVEL5-certificates to the participants of an informal learning project in Southill men’s shed, Ireland. 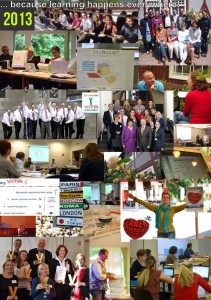 In September we organised the Swiss learning festival in the capital of Berne with LEVEL5. Also, we designed the informal learning and validation setting of interns in the creative and cultural sector in one of the first knowledge alliance projects called EDUCCKATE together with University College London and the Link Campus University, Roma.

In July there was the final conference of the SuperMAN project dealing with the inclusion of people suffering from cognitive disorders via an innovative learning approach including a LEVEL5 competence validation. The project was extremely successful and the partners decided to offer similar trainings under the new label of CRM+i (Customer Relation Management and inclusion) from 2014 onwards.

June is the traditional month of REVEAL conferences and workshops. In 2013, we met with a rather small group of 20 members to prepare the future steps of the REVEAL cooperative. The prototype of the LEVEL5 software Version 3.0 with EQF extensions was presented for the first time – after additional six months of programming the beta version is expected to be piloted in January 2014.

In May and June our members participated in a series of conferences and workshops, among them was an invitation of the European Commission to the VINFL conference in Mechelen, Belgium and the VITA and GINCO T&T meetings in Thessaloniki, Greece and Göttingen, Germany.
Eventually, together with friends from Alden Biesen, Belgium and the PLATO institute of the University of Leiden in the Netherlands we finalised the general LEVEL5 reference system patterns. Based on that we prepared another 12 reference systems to assess and evidence competence developments of educational professionals in the projects GINCO T&T and PROVIDE.

In February and March we prepared the introduction of LEVEL5 in a climate friendly management and a regional development project, in the context of volunteering (in the RIVER project) and in the Erasmus for Young Entrepreneurs programme (EYE).

In January we released the VILMA movie that was produced by our friends from CARASANA, Cologne, Germany.

2014 will be a decisive year for LEVEL5 and REVEAL. The new programme ERASMUS+ is out – focusing on mobility with a large priority on validation of competences. We know, eventually through many of last years’ invitations to conferences and keynotes that our LEVEL5 approach may become a unique selling point for different kinds of projects in the new programme.
The VITA project http://vita-eu.org/has clearly shown that LEVEL5 can bridge all educational sectors and that it is especially suitable to make developments of key competences (like entrepreneurship, team work or customer relationship) visible.
Hence we would like to encourage you, as partners of REVEAL, to step into the new programme with the tailwind of our excellent results from the Lifelong Learning Programme.

I would like to thank you all for your valuable contributions, your commitment and friendship in the past. For 2014 I would like to invite you to enrich your innovative learning approaches with LEVEL5 and, if you like, become member of our cooperative*.

As always at the beginning of a new year – have fun with the 2013 impressions revealed at some of our meetings!