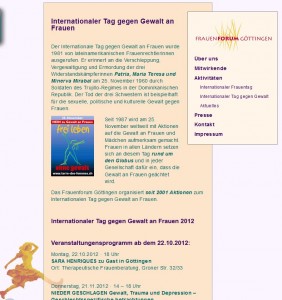 For the german webpage of the event please follow the link http://www.frauenforum-goettingen.de/antigewalttag.html

In the period around the 25th of November various actions in Göttingen took place. At 21st of November took place a conference organised by the network of experts dealing with psychiatric disorders in combination with gender aspects. It was entitled by “battered down? Violence, trauma and depression”.

“Battered down” is verbally translated from German language. It means on the one hand “being battered down to the ground” and on the other hand “to feel low”.

The main aim was to highlight the fact that violence / IPV often is not known and noticed as catalyst of depression. Although depressions are one of the most frequent aftereffects caused by traumata. Experiences of violence often are not recognised as catalysts of depression. As consequence treatments can fail and aggravate the health of the patient – in this case mostly women.

During the conference the connection between gender – violence – trauma and depression was emphasised. Professionals from different fields of the (psychiatric) health care exchanged their experiences and gained a lot of useful hints from experts who are dealing with the issue of IPV since decades. There were vivid discussions and fruitful networking activities on regional level. The E-MARIA project was recognized with a lot of interest during face to face discussions.